I was born and live in the small town of Cherkasy, in Ukraine. 16 years ago I learned that I have HIV. I personally know and understand what stigma and discrimination are. 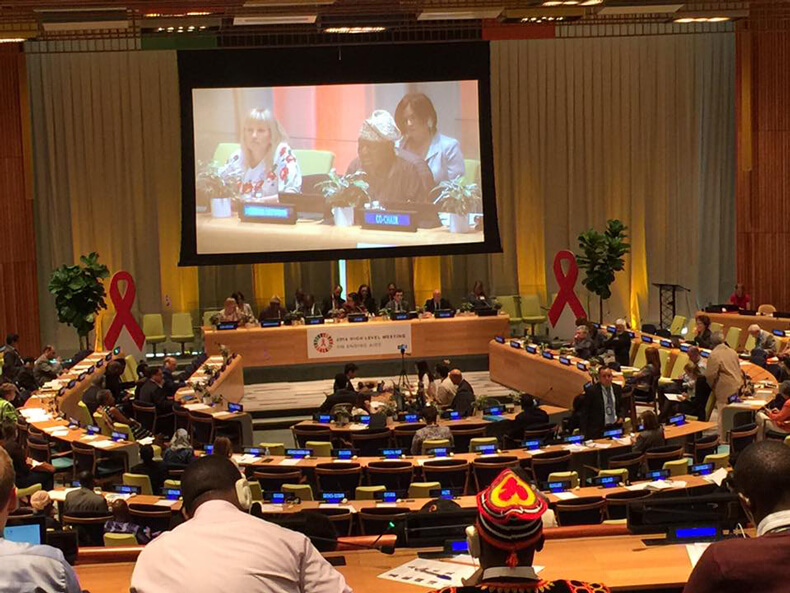 This is a positive example of women’s leadership and the ability to shift to governmental funding at the local level for programs that support women and children.

Specifically because I do not want the ratification of this political declaration to be just another document that will remain, for many countries, simply a piece of paper on the table or in a drawer, I believe that we, as representatives of the community, must mobilize our strength and find opportunities to continue the conversation at the highest level to determine the first tasks and find a way to complete them. But, in this conversation we are counting on the government as a supporting partner.

One of the first tasks for each government-partner is to recognize key groups: men who have sex with me, drug users, prisoners, sex workers, transgender people, adolescents, women, and girls, and to overcome the stigma and discrimination through the involvement of key groups in an effective answer in combatting HIV.

The only chance to change the situation is to listen to one another and take steps to meet each other!

As women-led civil society, feminists, activists, and women living with and affected by HIV, we are committed to continuing and building our efforts and partnerships to collaboratively realize the rights of people living with and affected by HIV, and to achieve an end to AIDS as a public health emergency. In order to achieve this, women and girls must define and implement the human rights-based solutions that we need.

For example, 6 speakers on this panel about women and girls are men. Only two speakers and our co-chair are women. Women and girls should be in leadership positions to speak about their own experience.

The principle of fully informed consent and decision-making must stand as a basic element for the provision of health, social and legal services.

The respect, protection, promotion, and fulfillment of the human rights of all women and girls, including sexual and reproductive rights, must be a core part of the HIV response at all levels.

Harm reduction aims to reduce the health, social and economic harms associated with drug use.

Where scaled up sufficiently, harm reduction interventions, such as needle and syringe programs and opioid substitution therapy, have had a significant impact on reducing new HIV infections, mortality, and rates of crime. Despite such success, harm reduction programs remain underfunded, and coverage falls short of what is required to impact HIV epidemics among people who inject drugs. Too many governments continue to neglect or even oppose harm reduction programs, and adamantly continue to pursue criminalization as their primary response.

Reduction International shows that HIV-related deaths and new HIV infections could be cut by over 90% by 2030 if just 7.5% of global funding for drug law enforcement was redirected to scaling-up harm reduction.

Ukraine, my home, is a lower-middle-income country. By 2020, lower-middle-income countries will be home to 70% of the people living with HIV. Middle-income countries should develop and implement costed transition plans as international donors, including the Global Fund, withdraw their support. The Member States must recognize importance of funding civil society organizations, particularly those that work with key populations, as well as importance for funding to remove human rights barriers to access to services for key populations. Funding must reach communities; community health services, community mobilization and community monitoring play key roles in the HIV response.

Preventing mother to child transmission is an unfinished task. In 2013, an estimated 240 000 children became infected with HIV, and more than three in 10 women living with HIV did not receive the necessary antiretroviral treatment to prevent transmitting the virus to their child. In Ukraine, this problem is particularly severe because of the serious stigma and discrimination that women who use drugs and we are pregnant face, which prevents them from having access to treatment and healthcare. Sometimes, women who seek treatment or healthcare can be criminalized for their drug use.

Today is my daughter Mila’s birthday. 15 years ago, when she was born, I was uncertain whether she would be HIV-negative or not because ART was not accessible – not only for me, but for millions of women around the world. Today a lot has changed, prevention is accessible, there are programs for care and support, harm reduction and treatment work, but, unfortunately, there remains a high level of stigma and discrimination, which is one of the main reasons that HIV is transmitted from mothers to children.

Sixteen years ago I was sure that I wouldn’t ever tell anyone that I am HIV-infected, and today I tell the entire world about it! This was only made possible thanks to other strong women who influenced and supported me.

We have many unsolved tasks, but, specifically thanks to the opportunity to be here and to be heard, we are given great faith in women's leadership and in our unending strength and preparedness to collaborate to overcome HIV around the world!

Only when each woman is free and can openly speak about her HIV status will we all be free of HIV!!! Thank you.